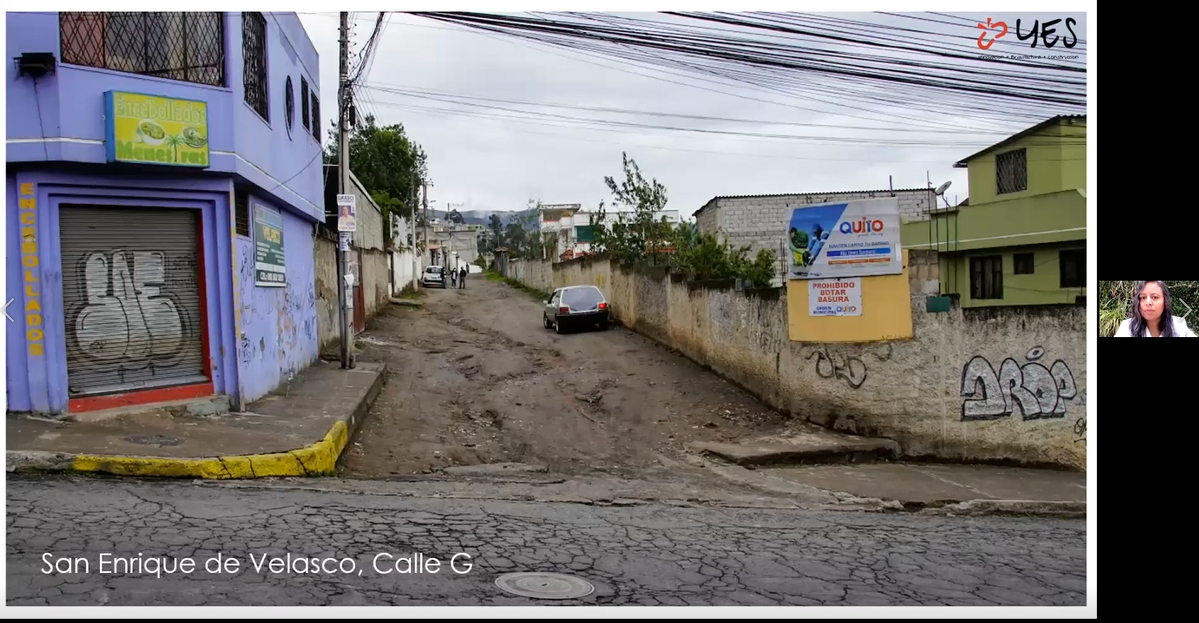 The moderator, Bráulio Diaz, Institutional Relations Manager of ICLEI South America, began by re-introducing the CLEVER Cities Project and the UrbanByNature Latin America Hub, which serve to help cities grow capacities and learn about facilitating nature-based solutions (NBS). He described Step 2 of the UrbanByNature methodology, PRIORITIZE, which focuses on how cities can work with residents and stakeholders to identify and select appropriate NBS measures adapted to the local context.

Following this, the first speaker, Grace Yepez, Director and Co-founder of YES Innovation, shared the experiences in working with the local community of Quito’s San Enrique de Velasco neighborhood to set priorities for NBS projects. In collaboration with the City of Quito and under the CLEVER Cities Project, YES Innovation has led a project to foster NBS in San Enrique de Velasco in order to combat the effects of prior environmental degradation. Central to these efforts was a focus on co-designing the space and the NBS projects together with the people. In working with the community, YES Innovation strived to build awareness about the value of plants and nature, to foster collective intelligence, and to give people tools to contribute to the development of their own neighborhood. YES Innovation was intentional in working with the community to learn about each location, to grasp the local history, and to understand the interests of the people. This process allowed them to better identify places and strategies to prioritize in NBS co-design.

Yepez also stressed the importance of affordability and accessibility for the successful implementation of NBS in Latin American contexts. Prioritizing low-cost Nature-based Solutions that do not rely on high tech allowed community members to be involved and therefore invested in the entire lifecycle of the NBS project. For instance, residents were able to implement low-cost gardens embedded within streets to prevent flooding. Involving community members throughout the process of NBS creation increases the likelihood that they will continue to be invested in the long-term monitoring of the natural systems.

Gabriel Dias Mangolini Neves, the Head of Sector for the Department of Environmental Licensing in the City of Campinas, Brazil, then spoke about how the metropolitan region of Campinas prioritizes and authorizes sectoral environmental planning. Neves highlighted the necessity of understanding and diagnosing the territory when conducting environmental planning by showing an ICLIE mapping the regional access to green spaces in the region. This contributed to the Municipal Greenspace Plan for Linear Parks, which fosters interconnected biodiversity while also creating space for social activities like walking or gathering.

Based on the diagnosis of the territory, 43 linear parks were proposed and over 50% already have some measures in place. Neves detailed the collaborative approach of Campinas in this implementation phase, which followed a multidisciplinary approach by involving people, organizations and government departments. Within the local government, Campinas involved many city secretariats to become stakeholders in the parks by participating in legislation, maintenance, and implementation of the linear parks. In addition to partnering with ICLEI TAP and private organizations to implement the linear parks, Campinas worked with the local community to plan and implement the parks. Such collaboration is critical because Neves stated that the greatest challenge that Campinas faces in the linear park projects is to work with shared management to maintain these public areas alongside the local populations.

The final speaker of the webinar was Gabriela Sánchez Sibaja, the Water Basins Project Coordinator of the City of San José, Costa Rica. She provided insights from the work San Jose has been doing since 2012 to co-facilitate the management of ecological corridors,urban river basins and green spaces at the municipal level. Prior to this, efforts to create biological corridors focused on protected areas of wildlife in rural areas, so a resolution of city hall created “Interurban Ecological Corridors for the Construction of Green Cities” (IBC). This program centers an interinstitutional, interdisciplinary process that requires multi-dimensional compliance to ecology, water resources, solid waste, governance and management, and socioeconomic and cultural standards.
Sibaja presented several examples of urban green spaces and interurban biological corridors, showing the intention of San José to weave green fabric into the city to maximize ecosystem services. Fostering this and thereby improving quality of life in urban spaces is critical because, while urban spaces cover only 2% of global land, urban inhabitants consume 75% of global resources and it is expected that by 2050, 70% of people will live in cities or towns.

The webinar recording is available on the CLEVER Cities Youtube Channel. For more information on upcoming events and to receive our monthly UrbanByNature Digest, fill out the UrbanByNature registration form.

The next UrbanByNature Latin America webinar will take place on 6 October and focus on step 4/ COMMIT AND PLAN of the UbN methodology - stay tuned and thank you for joining us!

About UrbanByNature
UrbanByNature is a facilitated expertise-sharing and capacity-building programme to empower local governments all around the world to harness the boundless potential of nature for sustainable urban development.