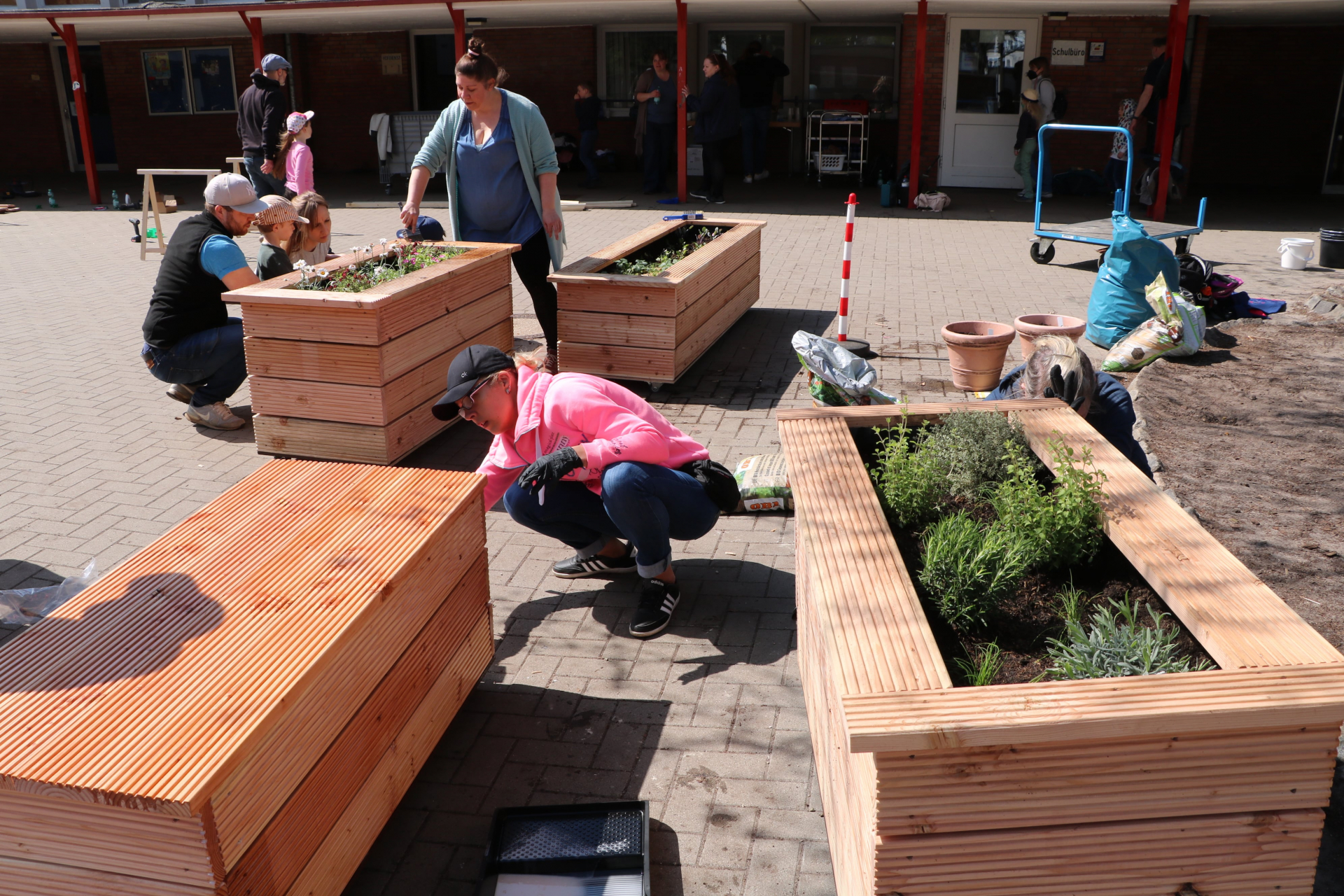 CLEVER Cities Hamburg partnered with students, family members, and teachers to recently built two mobile school gardens in two primary schools in Neugraben-Fischbek. Originally, the schools planned to turn an existing area of the school yard into a school garden and outdoor classroom. However, the neighborhood is currently undergoing demographic changes that are increasing demand for primary schools. As a result, the local school authority has instead proposed enlarging both schools and restructuring their school yards. Though these changes will occur over the course of a few years, they nonetheless limit the lifespan of the sustainable and long-term NBS schoolyards planned by CLEVER.

In response, CLEVER Cities and partner Hafencity University are consulting with one school community to  jointly come up with a vision for a temporary or mobile NBS schoolyard. The project intends to co-create a solution that can be built with the help of the parents and replicated in other schools. Together, the school community dreamed up a mobile school garden consisting of mobile high gardening beds and mobile benches with lockable storage for the gardening tools. When all the elements are pushed together, the mobile garden only takes up approx. 15 sq.m. and thus can be easily integrated into existing school yards. It is possible to assemble the garden in one location or spread it out in various areas of the school.

University students illustrated the design and created a construction manual. Despite the clear plan and community commitment, the project was postponed due to the COVID pandemic. Larger group gatherings were prevented, and the joint co-building of the mobile planters was not possible. The mobile gardens were built instead in April 2022. In the short time since their completion, the keen interest taken by students in the planters is clear. They are constantly asking questions and closely observing the plants!  They also use the planters to play hide-and-seek during break times.

CLEVER Cities is another clear example of how school gardens can play a meaningful role in school community and student well-being. Constructing a mobile school garden with the help of the students and family members, in particular father figures, was also meaningful on a personal level. The activity engaged caretakers in the lives of their children by sharing a special experience which would often not have been possible at home. The school plans to use the planters as an outdoor classroom and hopes to integrate them into the curriculum in each of the grades and also across grades to foster peer-to-peer learning. Different classes are also assigned to care for one planter each in order to create a higher sense of ownership. In one of the schools, the mobile planters will even move with the school to their temporary location while the school is being rebuilt in the future.

This NBS project is a good example for a successful bottom-up co-creation process where different and at times hard to reach community members are brought together in all stages of the project, from the needs assessment to design and implementation. CLEVER is especially pleased to have included the actual site user—students—in the process. While co-created projects usually take longer to be detailed and implemented and typically involve a wider range of participants, participants are often proud of the results. In this case, there has already been an interest from other schools to replicate such mobile garden solutions on their premises.