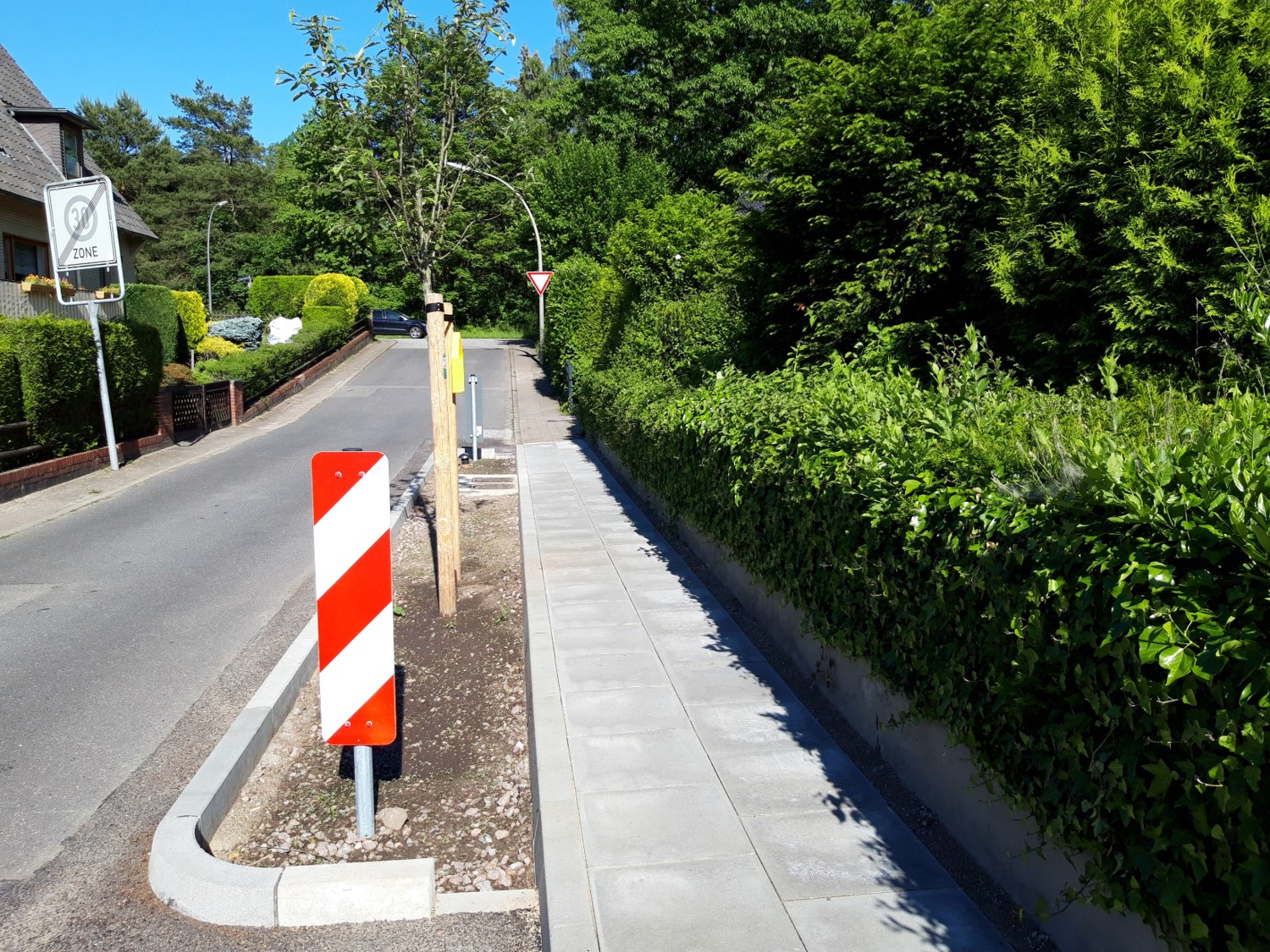 CLEVER Cities Hamburg has recently completed 6 innovative roadside infiltration beds in the neighborhood of Neugraben-Fischbek. Roadside infiltration beds are made up of a topsoil mixture that filters and cleans road water (run-off) before it enters the groundwater system. Hamburg’s new beds will test whether infiltration planters can be used as a nature-based solution (NBS) climate adaptation measure in areas affected by heavy flooding during stormwater events. In addition to the beds, a variety of street trees have been planted. These trees are part of a study exploring what kind of roadside vegetation is able to grow in conditions that range from dry to very wet.

The CLEVER infiltration planters are based on another CLEVER Hamburg project, the NBS-drainage study (also available under resources), which used a virtual model to simulate the effectiveness of nature-based drainage solutions in specific focus areas. The infiltration planters are now one of the first measures to be built from that study. In contrast to previous solutions built in Hamburg which relied heavily on concrete, the CLEVER beds consist of hollow plastic baskets set in a porous soil mixture, while the top layer is made of a special gravel turf. This surface is porous enough to allow rainwater to drain through the topsoil. During stormwater events the rainwater then eventually fills up the hollow air chambers below. After the storm – which generally lasts only a few hours - the water is slowly released into the surrounding area into local groundwater reservoirs. This not only helps prevent flooding, but also supports the unhindered cycling of water. This strategy has been put forth by the city of Hamburg as part of their RainwaterInfrastructureAdaptation (RISA) program.

There are numerous other benefits when using this design for the infiltration planters. For example, this design intentionally reduces the likelihood of pedestrian accidents caused by falling. The infiltration beds are unlikely to cause stumbling as they are filled with an aggregate which reaches up to 10 cm below the existing street level. Older infiltration beds required special railings as a safety measure. Unfortunately, such fortifications of roadside planters do not positively contribute to the overall streetscape, and the new planters are thus an important improvement.

Another benefit of the Hamburg approach is that a variety of plants can be placed in these filtration features, such as trees and flower meadows. Some planters primarily include reeds, which often look unruly if not cared for properly. Reeds can also obstruct the general field of vision within the street resulting in a feeling of unease for inhabitants. The infiltration planters with the shallow-rooted street trees planted by CLEVER resemble standard impermeable roadside planters. This illustrates how NBS can be integrated into existing roads without much disruption other than replacing a few roadside parking spaces.

In addition to building the planters, CLEVER Hamburg has also initiated a community observation project to monitor the growth of the street trees and the accompanying flora and fauna in these planters. Residents are asked to share their observations of the infiltration planters by uploading them to a public platform using the app epicollect5. This is not just a technical observation, but is supposed to intrigue people to take up an interest in environmental topics. Participating in this kind of activity can foster social cohesion through the sharing of common experiences. This approach is also intended to shift the power balance between the city administration and residents by promoting a shared and common responsibility for the public realm. This observation is an important part of planning a high-quality NBS as NBS are not just about finding an ecological solution, but also about addressing societal challenges and creating added social and economic values.