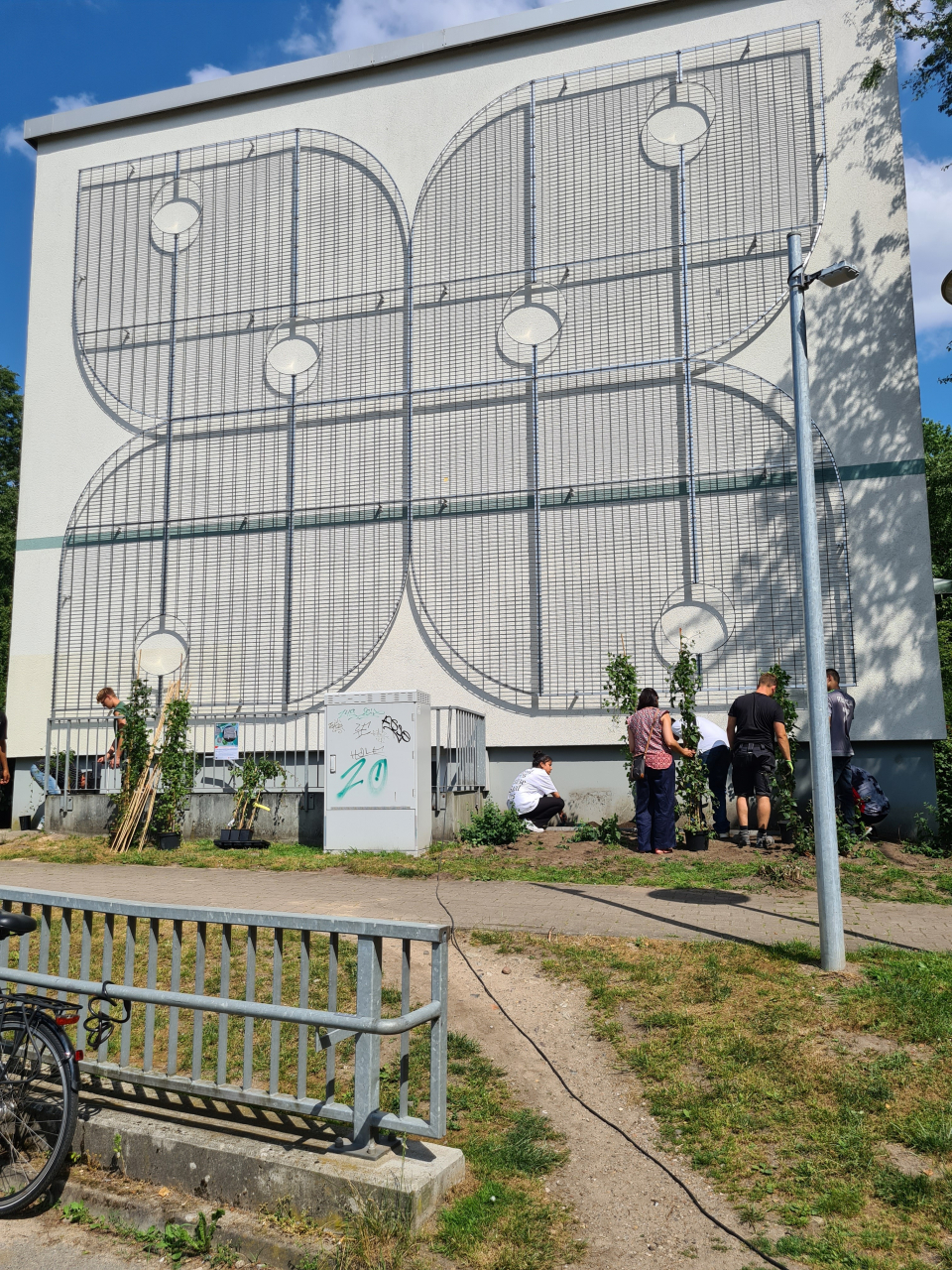 „We see the beauty of butterflies, but rarely do we acknowledge the transformation required to get there.“ Maya Angelou

After four years of planning, Sandbek housing estate residents of all ages joined CLEVER cities in the planting of a butterfly shaped green façade. Under the guidance of two experienced gardeners, residents co-creatively planted 12 climber plants (Clematis and Knotweed) along the façade. Participants included two siblings from the flat directly opposite the façade who were eager to each plant one of the big 1.5 m high clematis plants and committed to taking care of watering for the foreseeable future. This willingness to look after the plants is a clear indicator of the successful co-management vision of CLEVER.

CLEVER organized an accompanying neighborhood gathering to celebrate the inauguration of the green façade and to raise awareness for the project. Highlights included a bouncy castle, a Loki-Schmidt-Foundation nature education program, and information on the benefits of green façades and intended outcomes of the CLEVER Cities project. Community was built over coffee and cake as children played and participated in greening their neighborhood.

Planning for the façade began in 2018, when CLEVER Cities and the local city-owned housing corporation SAGA met to discuss retrofitting building stock with cost-efficient green façades. The decision was made to co-finance a pilot green façade in the Sandbek housing estate, a site located within the CLEVER Cities project area. The purpose of the façade is to provide an opportunity to examine how the co-creation of green façades can not only provide more nature in the city, but also contribute to urban regeneration challenges such as 'health & well-being' and 'social cohesion & environmental justice'.

While green façade technology is well established and in and of itself no longer novel, there remain numerous challenges when implementing these kinds of projects. In this instance, the housing corporation was worried that allowing plants to grow directly on the wall surface would damage the selected building’s energy efficient insulation. Inclusion of an irrigation system was also rejected due to the high associated costs. As a result, the ideal solution was determined to be a 10 meter high free standing wall built 2 meters in front of the existing building. This approach allowed continued access to the outdoor staircase that leads to the basement and prevented the creation of dark areas that could be perceived as unsafe. Unfortunately, this design included concrete components that extended beyond the allowed development area, requiring a special permit and exemption. CLEVER Cities had to justify the urban value of the façade before approval for construction was issued. After winning approval, it became apparent that the design was extraordinarily costly, and the project was determined to no longer be feasible.

This is where the ingenuity of the CLEVER team and city partners came in. The decision was made to build a ground-based green facade with more affordable aluminum frames directly attached to the building façade and covered with lightweight metal fencing rods in order to provide climbing assistance for vines. This new design also presented CLEVER Cities with the opportunity to envision a more customizable shape for the climbing assistance frame at only a small extra cost. This was considered a big win: a co-determined and easily recognizable shape has the potential to foster more ownership and joy among the residents than a basic rectangular façade.

After a survey distributed to residents asking them to suggest edible plants for the green wall received little response, CLEVER changed their co-creation approach to an outdoor co-design event. This event took place at the site of the future green façade. Residents voted for their preferred motif, choosing between a simple rectangle, a fish (the area is called Fischbek), the local metro station icon, and a butterfly. COVID meant that a longer co-creation workshop was not possible. Still, over 70 votes were collected, with the butterfly motif, a symbol of biodiversity, the clear winner.

The challenges faced by the project didn’t end with the selection of the motif–material costs rose, supply chain issues continued, and finding a competitive construction bid proved tough. Still, approx. 100 people attended the inaugural event, making this a very successful co-creation event. Despite planning challenges, the housing corporation is open to replicating the façade throughout the housing estate and perhaps even in other parts of the city, should the façade be deemed ‘successful’ by inhabitants and project partners. There are at least 3 other buildings in the Sandbek area which have the exact same façade and have thus already been identified as potential candidates.

This project has also resulted in meaintful learning for similar initiatives. Clearly, co-creating nature-based solutions (NBS) can include a wide variety of challenges. It is important and often difficult to plan community appropriate co-creation strategies that appeal to a wide number of people and allow for meaningful participation. Co-creation processes need to be flexible and quick enough to react to unforeseen changes, be it in the design parameters or in the implementation schedule.