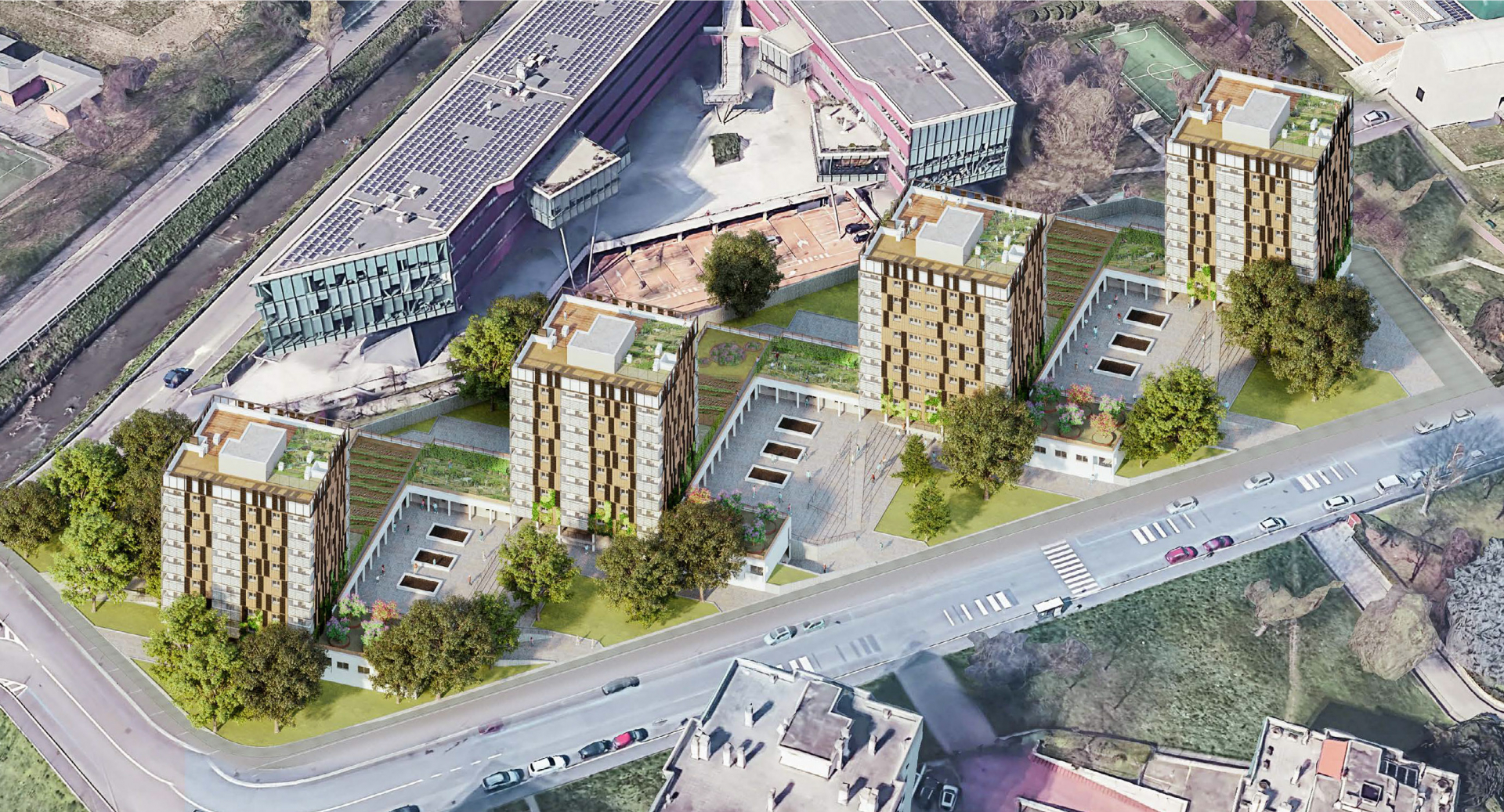 How can green roofs be economically sustainable? The example of Milan's social housing complex in Via Russoli

In Via Russoli, between the historic centre and the suburbs of Milan, there are four buildings, built in the eighties, owned by housing association ALER - Azienda Lombarda Edilizia Resenziale Milano. A decade ago, it was discovered that the insulation panels on the facade contained asbestos and thus had to be removed. Once removed, the panels were not replaced, causing thermal discomfort inside the building- an unsustainable situation for the residents, also from an economic and environmental point of view.

The architect Tiziana Monterisi became aware of this problem thanks to a group of ladies residing in the buildings of Via Russoli, who managed a rooftop vegetable garden in the centre of Milan. From that moment on, a relationship was established between the architect and the ladies which was formalised via the association “Coltivare la Città” (Cultivating the City).

Thanks to CLEVER Cities and public incentives, it was possible to start a project that involves the reconstruction of the facade with natural and sustainable materials, and the construction of green roofs on the four towers and on the three low bodies connecting the buildings.

The CLEVER Cities co-design process represented a starting point for initiating a collaboration between the residents in the towers, the architects and other stakeholders to design the space on the roofs together.

With a total area of ​​about 3,500 square metres, the roofs will have different functions: the surface will host orchards (510 square metres), vegetable gardens (750 square metres), flowers, aromatic and honey plants, meadows and photovoltaic panels.

For the management and maintenance, a collaboration with social cooperative “Opera in Fiore” is being evaluated, aiming to (re) integrate disadvantaged people, in many cases former prisoners, who, by caring for greenspaces, will be able to enrich their daily lives.

As the architect Emanuel Falappa (Ricehouse) pointed out: "It is an architectural project, but we still have some open questions related to the costs of construction and maintenance and management of the green roof. For example: how to find the funds for the creation of green spaces (Milan’s public incentive Superbonus does not support it) and how to then bear the management costs? Other issues to be addressed are, among other things, the control of access to the roofs, which on the one hand must be open to as many people as possible but, on the other hand, the safety of the tenants must be ensured."

As for the possible incentives to help condominiums to build a green roof on their building, Emilia Barone, CLEVER Cities project manager for the Municipality of Milan highlights that: "To create a green roof on your condominium, you need the consent of all condominiums and it is desirable to agree and follow the management rules by the condominium itself. The first step consists in carrying out a technical-structural check and if the conditions for the construction of the roof exist, the design and subsequent construction can be started. As an incentive, you can take advantage of Milan’s Green Bonus which covers 36% of the expenditure up to a maximum of € 5000 per real estate unit ".

The most important considerations for those wishing to create productive green roofs that are economically sustainable but also play a role in urban regeneration are listed below:

At the moment, there are various funds in Italy dedicated to making condominiums more sustainable, including the Superbonus 110%. Even if the construction of a green roof is included among the actions to reach the programme’s objectives, not all costs for construction and installation are covered. However, to cover the costs, it is possible to take advantage of the green bonus, but one can also consider other local, national or European funds.

Users or managers of green roofs are not always the owners of the apartment under the roof. It is suggested to always remain on good terms with the owner and to also make clear the responsibilities: who takes care of the expenses for the interventions on the structure, who pays for the daily maintenance costs, etc. But also those who will benefit from the income obtained, for example, by renting the roof for events or photo shoots.

Knowing how to evaluate the sustainability of one's goals

This can be one of the more complicated issues. You can start from a very specific goal, but during the management you may discover that the project is not economically sustainable and/or other problems intervene. It is therefore important, in addition to having an initial plan, to also have flexibility to adapt this plan to the situation. At the same time, however, it is important not to lose sight of the main objectives set at the start.

Deciding what to grow and for whom

Fruit, vegetables, and flowers can be grown on a productive roof. The choice of which (edible) products to grow must be made based on the local climate and the final destination of the harvest, for example if it is to be consumed by roof farmers, workers volunteers, or if it will be used for educational events and/or for sale B2B or B2C. For roofs with only a few hundred square metres of crops, it is difficult to live on the sale of the crop alone. The gain is of a more social, educational, environmental nature.

Understanding how to enhance the social impact

In addition to economic sustainability, the 'CLEVER' green roof should also have a social impact and make a positive contribution at the local level.

CLEVER roofs can have many indirect advantages, for example, creating a shared garden on a roof can save you money on grocery shopping and gym membership!

green roofs via Russoli (Clever Cities) , licensed under for promotion