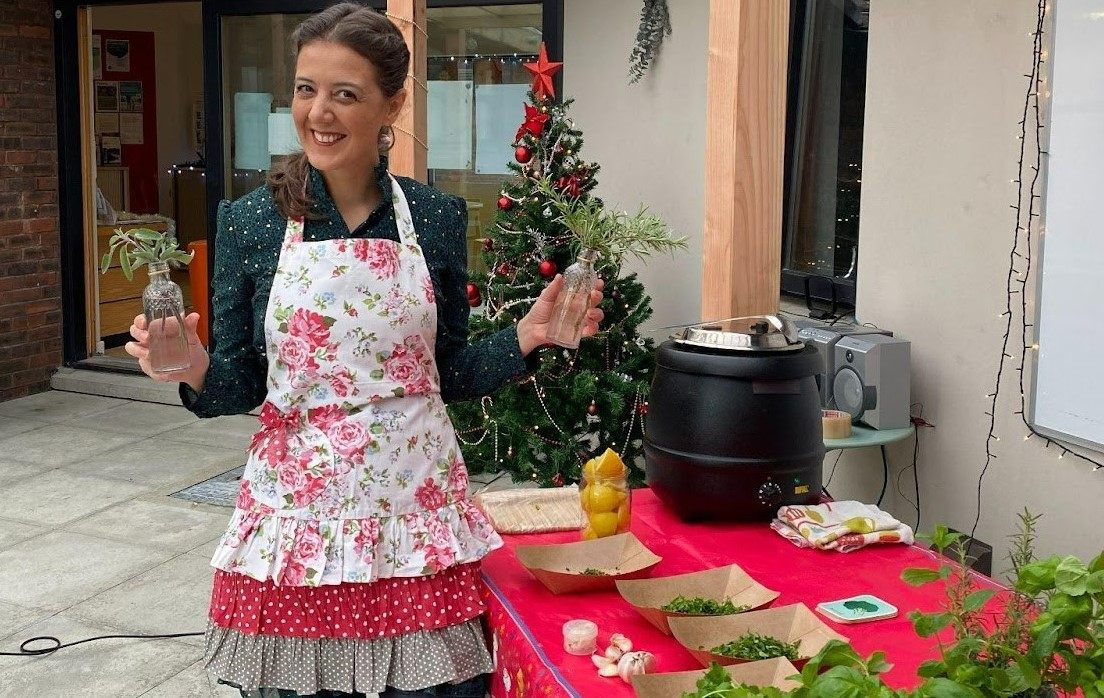 Ozge Aden is a member of the Thamesmead community and successful recipient of the CLEVER Cities sponsored Making Space For Nature (MSFN) Community Fund last year. The grant programme helped Ozge to realise her idea: to combine education on eating healthily with growing food from seeds and cooking from scratch. Having worked for the National Health Service as a community healthy eating teacher previously, Ozge’s knowledge and experience of running sessions for people from different backgrounds have been valuable in helping individuals and families to eat well and stay healthy.

Poor diets and nutrition aren’t new to modern society yet there is still a lack of education on the impact certain foods can have on our minds and bodies. Ozge understands that sometimes we have physical barriers to keeping fit but believes ‘there is nothing stopping us from eating well.’ Some supermarkets increase their prices on some items, such as organic foods, but Thamesmead has a Lidl supermarket which sells affordable vegetables, so ‘healthy food does not have to be costly’.

Ozge’s sessions focus on learning about diets with reduced salt, sugar and oil as well as teaching about growing your own food from seeds. This is what Ozge enjoys the most, as she believes that gaining a deeper understanding of where our food comes from promotes a positive relationship with what we eat and can help improve both our mental and physical health.

Ozge says, ‘I always see the community I am living in like my family.’ She has formed a network from working with diverse groups of people, including children, the elderly, people with physical and mental disabilities, and people of different ethnicities. Bringing people together is a key part of Ozge’s mission; one participant said ‘I’m so pleased to have found you.’ The sessions are free, but people have shown their gratitude and generosity through food donations and homemade gifts, such as knitted dishcloths. Participants of the sessions are enthusiastic to learn and keep in touch by sharing photos with one another to record the growth of their homegrown vegetables, such as garlic and leeks.

The MSFN Community Fund is not only about improving green spaces, but it encourages a positive relationship between communities and their environment, and this has been one of the great successes of Ozge’s sessions. Not only that, but Ozge thanks the grant for helping her to gain back the confidence she lost during the lockdown, going on to say ‘I was so happy and nervous when I went back to teaching and I realised I didn’t lose my skills.’ The grant helped Ozge financially, but also with her personal skills and she encourages others to build their confidence by doing something they believe in.

Since receiving the grant, Ozge has acquired additional funding from the local council to run sessions with the Children’s Centre and Youth Club and continues to work with more groups in the community, sharing her knowledge to help make the whole community happier and healthier. Round two of the MSFN Community Fund will opened 21st March 2022 and has closed for the year. Find out more about current Thamesmead funding schemes here!

This work was supported also by Peabody, the Greater London Authority, and Groundwork London.