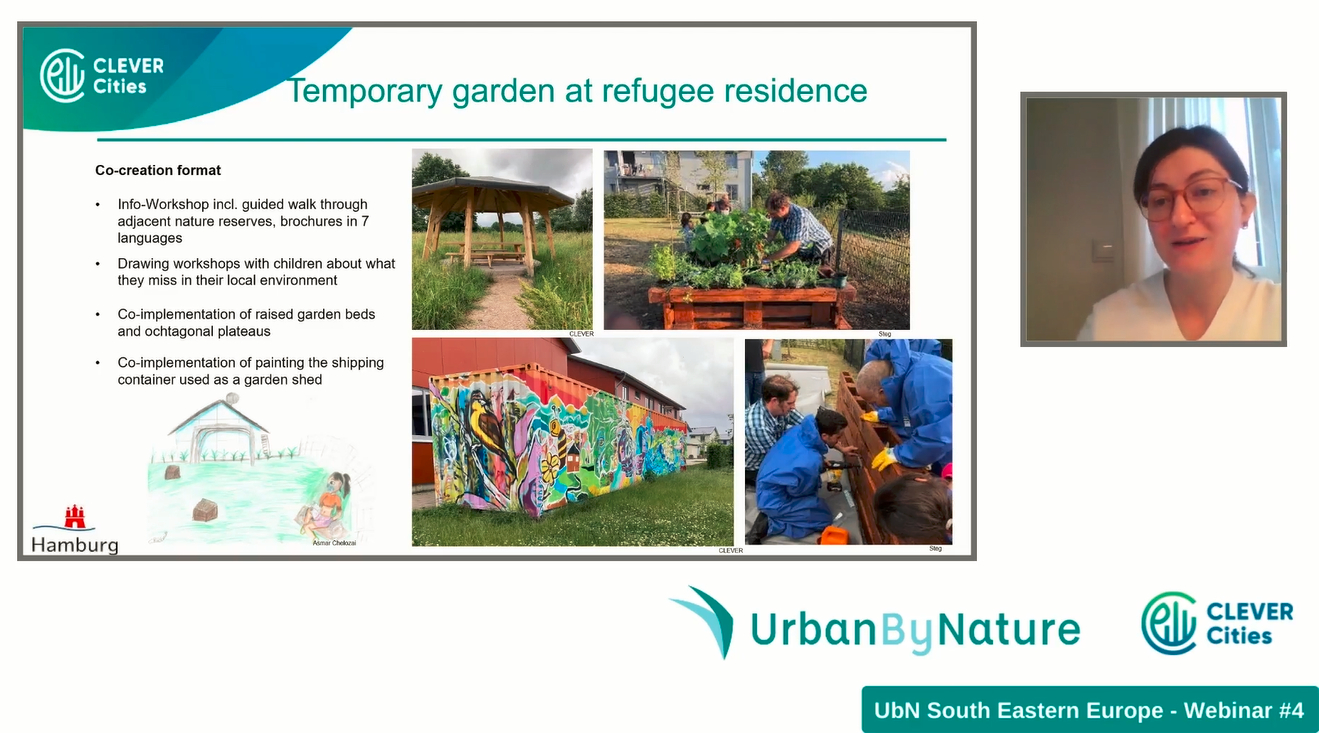 The moderator, Ana Mitić-Radulović, President of the Management Board of Centre for Experiments in Urban Studies - CEUS, began by re-introducing the CLEVER Cities Project and the UrbanByNature South Eastern Europe Hub, which serve to help cities grow capacities and learn about facilitating nature-based solutions (NBS). She described Step 5 of the UrbanByNature methodology, IMPLEMENT, which guides cities in setting clear implementation phases within a realistic time span, making good use of the available resources.

The first speaker, Sophio Konjaria-Christian, CLEVER Cities Project Coordinator for the District Council of Harburg, Hamburg, Germany, presented on the experiences of the city of Hamburg with co-implementing NBS with local stakeholders. The CLEVER focus area lies in Neugraben Fischbek in the South-West of Hamburg, a growing area for which developers have the goal of designing spaces in line with nature. Throughout this development, CLEVER has overseen 20 NBS implementations, which have offered both natural and social benefits for local residents. As the local population has high rates of immigrants, refugees, households with children and social welfare recipients, there is a great opportunity for NBS to provide social infrastructure and enhance social cohesion. CLEVER worked to incorporate local stakeholders in the project activities and foster community ownership through guided workshops and expert-led discussions. In her intervention, Sophio specifically highlighted the co-creative process of developing temporary gardens at refugee residences.

These gardens were intended to enhance social cohesion of the refugee residents, who were temporary and often faced a language barrier. Through creative approaches like guided walks, multilingual brochures, and co-building carpentry workshops, CLEVER focused on creating solutions that worked specifically for this population. She also discussed the strong co-creation focus of a school-garden redesign, in which CLEVER conducted workshops with students and gave presentations to the parents unions. This co-design process resulted in a collaborative implementation approach with pupils, who were participating in guided co-building and co-planting workshops. Sophio also discussed an innovative drainage system with blue roof technology, which, as a very technical project, did not lend itself as easily to co-design with residents. CLEVER was however able to foster collaboration between local construction companies, academia, and the local government. Sophio concluded with a reflection on some key challenges and lessons learned from the CLEVER Cities Project in Hamburg. While continuous participation of stakeholders can increase a sense of local ownership, it is not a common practice for companies and public administration. It is therefore necessary to commit resources and facilitate events such as inaugurations, neighborhood gatherings, and symbolic gifts to enhance public perception of the implementations and the co-creation process.

Next, Julia Tzortzi, Associate Professor in the Department of Architecture, Built environment and Construction engineering at Politecnico di Milano, Italy, shared insights from the proGIreg and euPOLIS projets in the City of Piraeus, Greece. ProGIreg is a European Commission Horizon 2020 project, which funds nature-based solutions for post-industrial regeneration through co-creation with local citizens, research institutions, businesses, and NGOs. Pireus has implemented several NBS interventions through this project, including community-based urban farms and gardens, green walls and roofs, pollinator biodiversity initiatives, accessible green corridors, soil regeneration projects and aquaponics. Julia introduced the NBS Roadmap of Piraeus, which includes stages of preparatory work, planning, and co-design. The main goal of this process is to involve local stakeholders and to produce a feasible and ready-to-use urban plan and design proposal. Through a spatial analysis of the city of Piraeus, including an assessment of green spaces, the project was able to identify areas for regeneration via green corridors and blue-green infrastructure throughout the 5 districts of Piraeus. Julia continued her intervention by illustrating co-design and co-implementation experiences with local schools in the Marias Kiouri area, where the abandoned district railroad was converted into a green corridor and a school urban garden. Throughout design and implementation, pupils and teachers actively participated in the process, from visioning and planning to actual planting and painting activities.

Julia also reflected on virtual collaboration processes with stakeholders during the Covid-19 pandemic, which actually provided opportunities to increase interaction with high school and primary school teachers. Positive outcomes of the co-implementation process were improved integration of children and youth from immigrant backgrounds and a better understanding of NBS among all stakeholders, which led to continuous activities even beyond project efforts. Julia then continued with highlighting implementation experiences from the euPOLIS project, which is also focusing on collaboration with residents, schools and other local stakeholders for the implementation of NBS solutions that improve community spaces in the city and address environmental and social issues.
In the discussion round, Sopho provided additional information on shared funding schemes for NBS installations in local schools, and accessibility of implemented NBS for the general public. The webinar concluded with a reflection from both panelists on promoting nature–based solutions in governance.

The webinar recording is available on the CLEVER Cities Youtube Channel. For more information on upcoming events and to receive our monthly UrbanByNature Digest, fill out the UrbanByNature registration form.

The next UrbanByNature Latin America webinar will take place on 24 January and focus on STEP 6 / MONITOR of the UbN methodology - stay tuned and thank you for joining us!